Social Media And The Press To The Rescue.

Love it or hate it, social media is here and it’s here to stay. Many people, including my dear husband see only the negatives, its use for bullying and defamation.

Used properly social media can be a useful tool for businesses, or for individuals, a means of spreading good news and staying in touch with friends and relatives who live in distant parts.

Quite recently my company, Abbey Funeral Services in Tonbridge, Kent, experienced a very serious problem which was eventually resolved harnessing the power for good that is in social media.

We discovered, quite by chance, that if you used a Google search and typed the words “Abby funerals Tonbridge” the first thing to appear in the search results was a pay per click advert for the cooperative. The way in which this had been achieved was by linking, in one advertisement, a business which the Co-Op own in Lancashire, called Abbey funerals, with the Co-Op Funeralcare branch in my town of Tonbridge.

I was justifiably concerned and turned first to the Co-Op with an email to say “did you know that……” to which I had no response. My next port of call was to consult with the geeks of this world, those clever people who know pretty much all there is to know about computers and the world wide web.

I spent a morning with two such experts at Golden Charter offices in Glasgow during a trip there for another business meeting. They were enormously helpful and set me up with our own pay per click Google advert. Surely that will solve the problem, but no, despite our best attempts and the promise of £200 a month to Google, the Co-Op were still above us.

In desperation I took to social media, tweeting and posting, to anyone who would read it, my dilemma. I was amazed at the number of people who viewed my Facebook post and retweeted my tweets. People were stopping me in town and telling me how dreadful this was.

I was delighted by the response, but this still hadn’t solved the problem. We had clients complain that they had tried to find our phone number using Google, (who uses yellow pages anymore?) and had got the Co-Op. Naturally I was concerned that we were losing work but more annoyed that families were being inconvenienced.

Then my worst fear was realised. A family needing us to move a deceased relative in the wee small hours used Google on a mobile phone to get our number. The call was answered “Funeral Service!” Not, “Co-Op Funeralcare” and no mention was made of the company name. The private ambulance which arrived bore no obvious markings, names or logo and it was only when the family later checked the paperwork they had been given that they discovered that their relative had been moved by the wrong funeral company. They immediately took measures to find the correct telephone number for us and asked us to organise moving the deceased into our care.

To be fair, the lady at the Co-Op’s regional mortuary in Tunbridge Wells was very apologetic and helpful. She said she had received several calls meant for us and was distressed at this latest event. She said she would contact her area manager and try to get the google advert removed. I wasn’t holding out much hope of this happening, so once again took to social media.

The following day we received a call from a journalist on our local paper. He told us that his editor had picked up the story from our Facebook page and could they write this up for the following week’s paper. After contact with the family concerned and offering them the chance to comment should they wish we agreed that the paper could use the story.

The reporter took information from us and then contacted the Co-Op media office in Manchester and asked if they would like to comment about the situation which had caused such distress. They offered apologies and regrets and said the fault lay with Google who had accidentally combined two of their branches, one in Lancashire and one in Kent, and they were both launching an internal investigation and contacting Google.

Within days of the Courier’s phone call and passing on the information that this incident would be the subject of a newspaper story which, as the reporter said, is not great publicity for the Co-Op, the advert disappeared and normal service has been resumed. 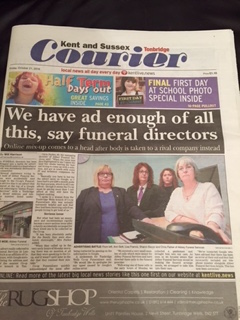 Whether or not this was, as the Co-Op state, an error on Google’s part, or whether it was a deliberate move against a competitor we shall never know. What we do know is that the good people of Tonbridge, many of whom we have served faithfully over the last 32 years, tweeted and posted their hearts out for us and we are so very grateful.